What follows is the goodbye e-mail I sent to the all-team e-mail list in early 2019.

What I like about this e-mail (and why I’ve chosen to reprint it here) is that it shows—with data!—what a mid-level individual contributor turned team manager turned technical leader’s time and effort looks like over a five year period at an enterprise B2B SaaS startup that grew from 40 to 200+ people (and much more in ARR), from Series A through acquisition and integration.

While there’s nothing within that discloses non-public information, permission hasn’t been explicitly granted so I’ve [redacted] some bits and edited other parts of clarity. (And I honestly wouldn’t even know where to go for that.) Take my word that these redactions and edits have 0 impact on the point of it all.

I was hire #42 by headcount and 13th oldest-by-tenure when we were acquired. My internal User ID is [~1800] which, considering we start counting users at 1000 and have [much more than that] in our database, is extremely low. (I joined WM as a user 8 years ago when the platform first launched.)

As an employee, there have been exactly 1,764 days between my start date and end date; or, an estimated 1,260 weekdays for 1,124 days of actual butt-in-seat work. (1,125 days if you count that Sunday I came in to work on some deck for Jeff ahead of a board meeting.) 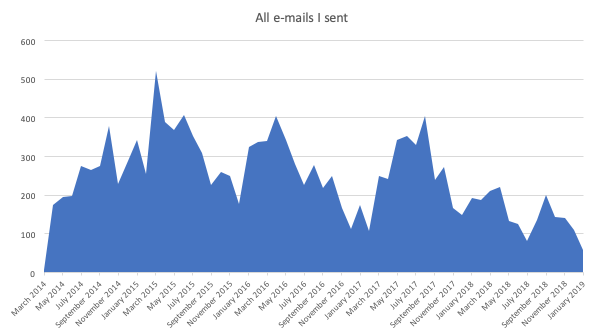 *No, of course I haven’t read all of them. But the important ones, certainly. 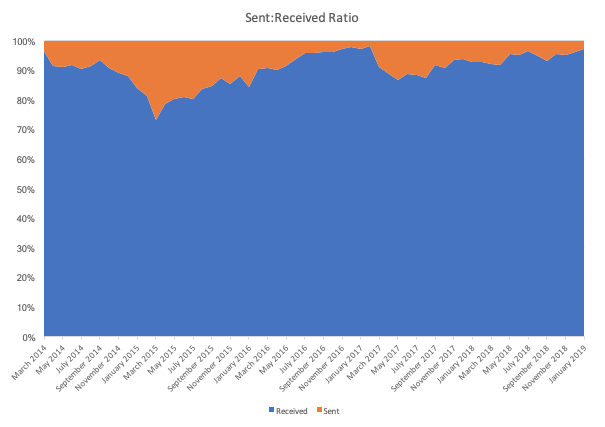 I started at WorkMarket reporting to Jeff [ed: one of the founders]. Unsurprisingly, a good number of my early inbound e-mails came directly from him. Most were fewer than 10 words long. 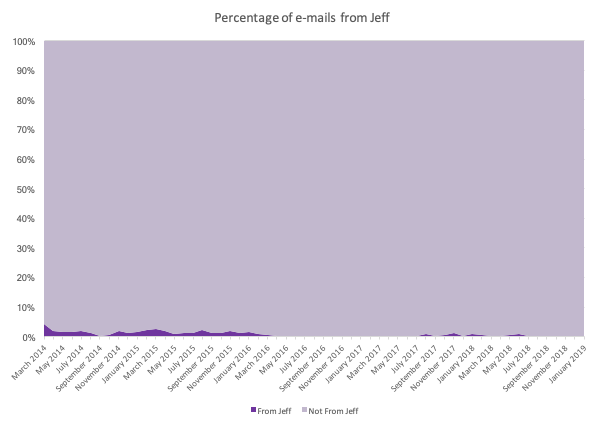 But, I also received my fair share of direct e-mails from our CEO-types [ed: post acquisition we had no CEO] asking for something. Some were more prolific: 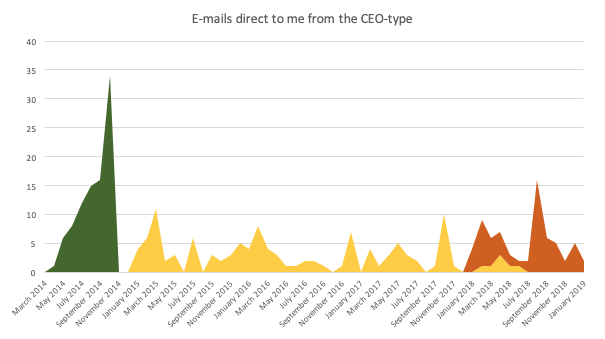 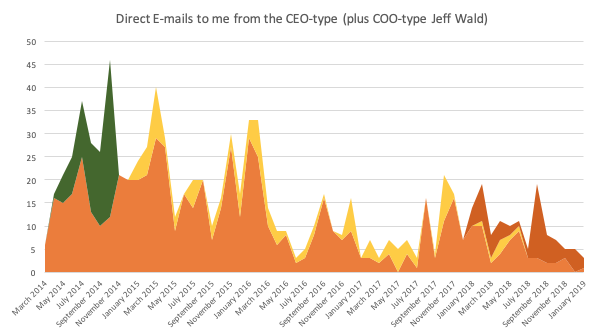 … with some more judiciously using [the all-hands e-mail] more than others. 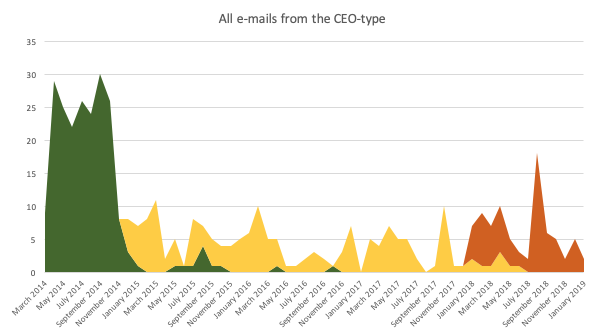 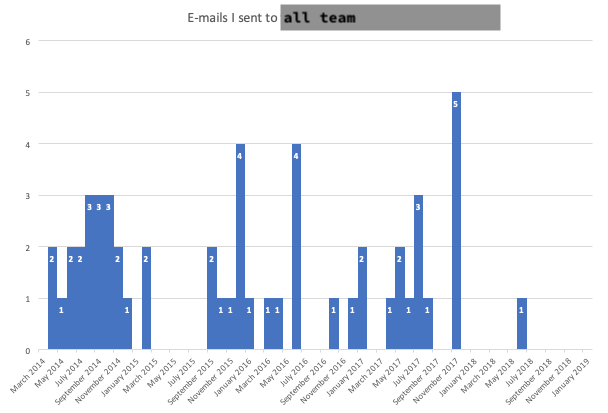 Most of my team-wide e-mails were related to team-wide compliance announcements and security related reasons. (Hey, remember AirWatch? Sorry to have bothered you with that. That’s [our acquirerer's corporate security team]’s job now.)

Given the time I afforded myself to run this analysis, I didn’t do the greatest job of scrubbing out noise like meeting invites and google doc invites out from my e-mail analysis. But, on review, they comprise ~10% overall and were generally consistent month-to-month. So, for those playing at home, consider all these figures to be directionally accurate.

Speaking of meetings, I think I did I fairly decent job at being WM Effective™. [ed: We had posted list of meeting guidelines on how to run an effective meeting. They’re pretty good, but they’re not mine. :)] (Almost kept it under 30 minutes on average): 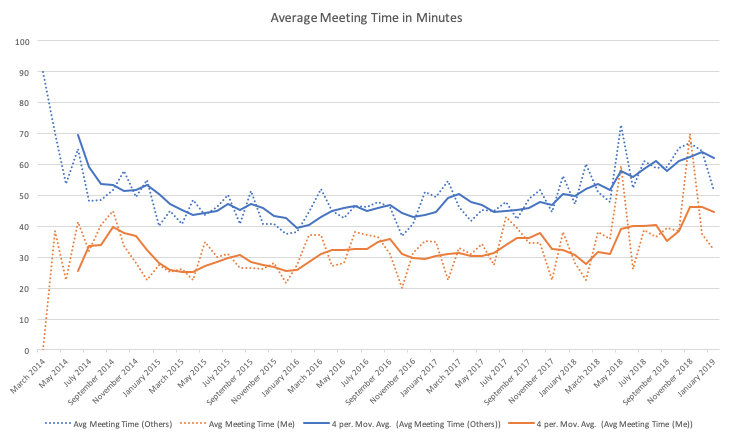 After our acquisition last year in January, you can watch my meeting times creep up with more and more [mothership] folk invading my calendar.

And oh boy did I spend quite a bit of time in meetings: 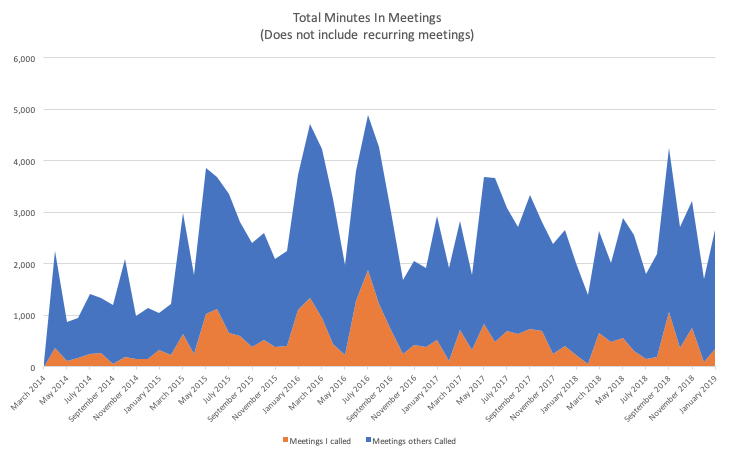 Note that these figures do not include recurring meetings and task rituals. (I filtered out all meetings set to repeat… so these are all “actual” meetings called for a very specific purposes, not part of the usual day-to-day maintenance.) I’ve been to 200 [weekly operating committee meetings]’s, give or take a few.

Doing the math, I’ve spent nearly 30% of my total time in meetings: 307 working days worth, in fact. (I’d graph this, but it’s tricky to break out recurring meetings per month than ad-hoc meetings, but total aggregates are doable.) Thankfully (and I credit all of you), only a small handful warranted calling an audible and shutting them down. (You know you can do that, right?) 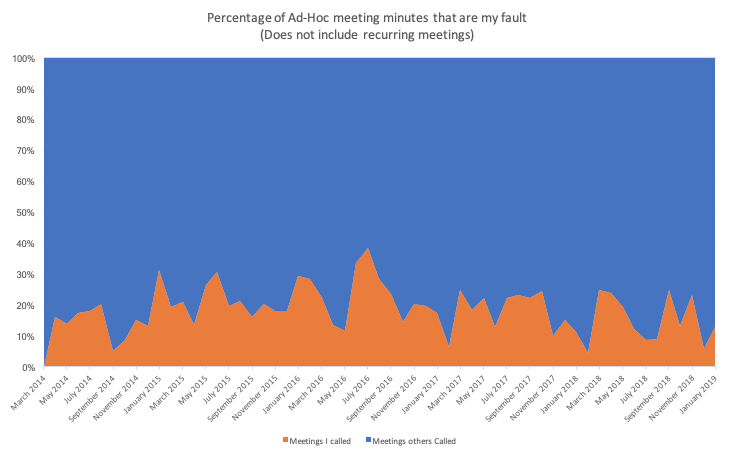 Early on in my WorkMarket days (before March 2015 when the Data Team was born), I averaged 4 hours of meetings per week—10% of my time. The other 90% (if you can believe it) I was coding.

That skill has since taken a precipitous decline. 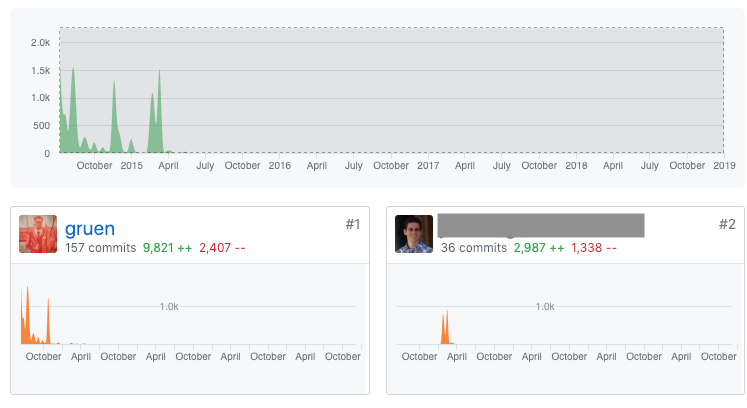 …but see if you can guess when we turned it on: 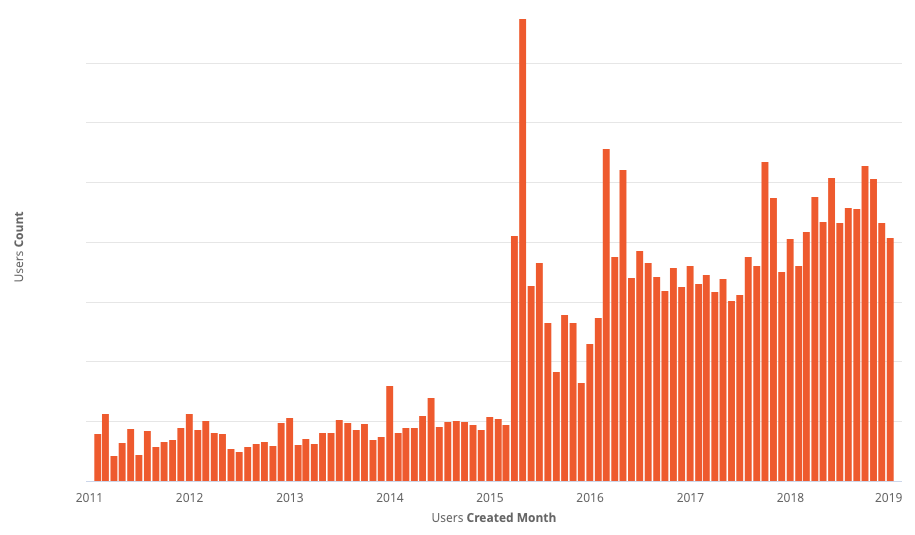 I’m still #2 in modeling data inside of Looker [ed: our Business Intelligence Tool], since eclipsed by [team member 1] and [team member 2]: 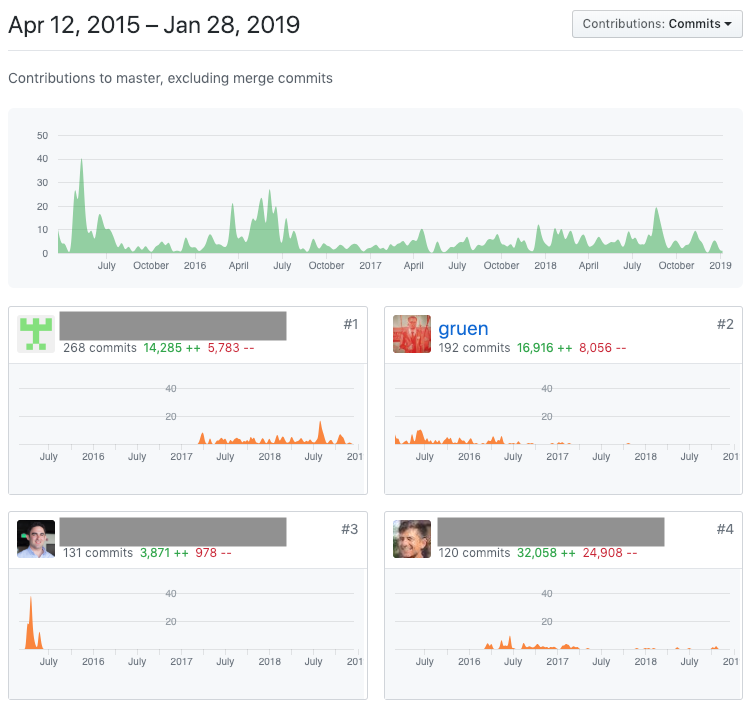 I wish I had a better graph for you. I really do: a few years back I tasked then-intern [team member 3] to bit-shovel our GitHub commits into our data warehouse so we could plot them over time. But, that project has since been abandoned as he took a real, full-time role on the team. (Belated congrats, btw.) Sadly, he no longer had time for quasi-frivolous projects, although he should still finish it or forever have my ire.

In March 2015, with the data team launched, we redirected inbound data requests (which were then coming directly to the engineering google group) into JIRA. From there, it was easy to chart how our team’s needs (and capacities) grew. 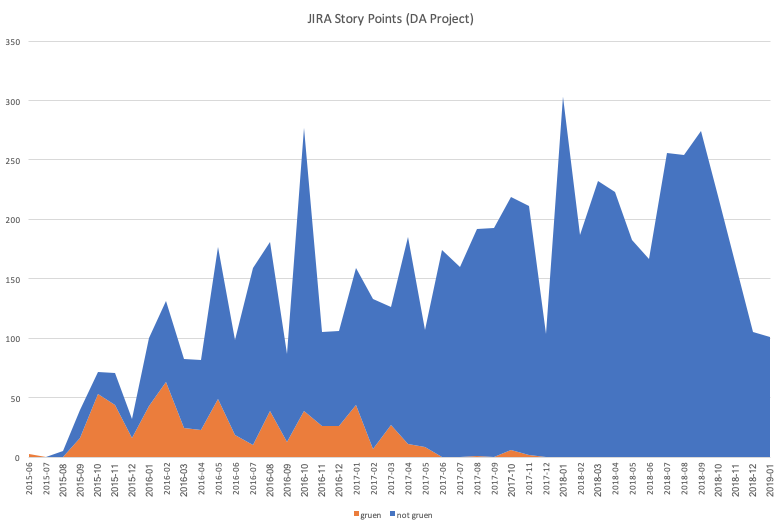 In my time here, I have completed 751 Jira tickets, contributing 577 of made-up velocity points to the data team. The team has done (and will continue to do) significantly more. [Team member 4] will be instrumental in helping here, so do say hello to him if you haven’t already!

Regrettably, Google Drive does a sub-par job of tracking documents created over time. But, I was able to estimate (based on my blocked-off writing times, average e-mail length, and composition times) I’ve easily written over 4,000,000 published words since joining WorkMarket; or, about 7 words per minute on average while in the office.

Speaking of being in the office, I did the math on how many days I was physically in:

And (I think) made appropriate use of our unlimited vacation policy: 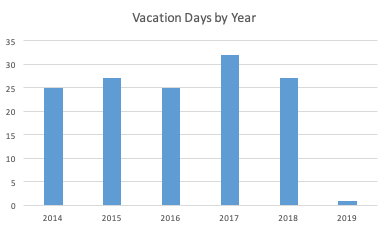 (I confess that, especially early on here, I still checked my e-mail daily. In 2018, not so much.)

To sum it up, this e-mail is 1,156 words long, with analysis performed in between meetings, since Friday last week up to my writing this last sentence. As this took 2 hours and 48 minutes to write, that’s ~7 WPM. This e-mail serves little utility beyond the intellectual curiosity; the ROI, extremely low. Perhaps negative. It would be sized “3” if it were pointed like a data story.

Outside of the numbers, WorkMarket has been a wonderful place to work and to grow, and I have all of you to thank. Having been here for nearly 5 years, I can say without hesitation that WorkMarket has never been better positioned to fulfill its mission, and I’m excited to see what you are all able to accomplish now supercharged by [acquirer].

For my part, I’m looking forward to taking some time off to travel, to plan a wedding, and to think about what’s next.

Please keep in touch. If I can be at all helpful, do not hesitate to reach out.